Undisturbed by Flo (the ghost) through the night, we were in high spirits until Karen jumped in the shower and the knob fell off, so to speak. Turns out we had only been put in the room in which she karked it (Flo, not Karen)! So with shattered porcelain shower knob in hand we meekly took our seats for breakfast, and I think we got away with it… we’re now in room 7 with a teddy bear rather than a ghost for company.

Anyway, we’re getting off the point, because our real destination today was Jamestown Gold Prospecting Adventures, across the way (“you can’t miss the claim jumper hanging in front of our store”). Here we met Bryant, a real retro ’49er with plenty of gold on show in his shop (and plenty of gravel in his voice!)

Bit of a hitch… we have to wait until tomorrow for the proper panning, but we had heerd tell of another opportunity down the road, so we hopped on our trusty steed and galloped off on a tour of mining towns… Copperopolis, Angel’s Camp, and first of all, Columbia, a living gold town. 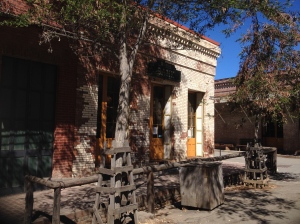 Wow. Columbia really is authentic. It’s sort of part-musuem town, and part real-town. Like all of the other towns in this area, there are hardly any inhabitants, so there’s a sort of ghost-town atmosphere in and around the smattering of tourists and the handful of be-costumed shopkeepers. We skirted the bank and the local livery store to find the mine, and started to pan in the searing heat of temperate California.

Naturally, we expected to unearth fat lumps of the yellow stuff before tea break, so we were a bit disconsolate when our first few attempts yielded naff all. Eventually we spotted a couple of glittery speckles, but you know what they say: having harvested a goodly portion, we took our gains to the mine-owner only to find that it was fool’s gold, and we was fools.

Ah well! Lunch in the period saloon on site (Sarsaparillo is a bit like Dr. Pepper), and then a tour of the museum itself and a quick lesson in what gold really looks like. Then for good measure we did another spot of unsuccessful panning. Better luck tomorrow.

Nevertheless undaunted, we did a little tour of the area, through another gold town called Angel’s Camp, a copper mining town called Copperopolis, and around a beautiful lake, Lake Tulloch, which unlike many of the watercourses in the area is weathering the current drought pretty well.

The scenery is stunning, and in this sort of heat, really harsh. You can see what hard work gold mining really was – and if it made anybody a fortune, it was money well earned!