Just about 45 minutes from Vegas is the site of one of the most extraordinary engineering projects of the twentieth century: the Hoover Dam, overseen by Herbert Hoover and inaugurated under Roosevelt’s presidency in 1935. For the last eighty years this has captured and controlled the waters of the Colorado River, providing water for seven states and preventing all sorts of flood damage to farming communities downstream.

It’s bigger and smaller than you might imagine: side to side, it seems somewhat smaller than the impression you have from the movies. But up and down it is every bit as big, and really daunting close-up. Peering over the parapet of the Visitors’ Centre takes some nerve!

The tour around the dam allows you inside, outside, up above and down below, and it’s really interesting to hear how the engineering works. Of course, the photo opportunities are probably the most interesting aspect of the tour, so here are some of our snaps.

At the head of the dam is Lake Mead, an enormous reservoir used for watersports and hydro-electric power. You can see on this photo the tide mark of the highest level the water’s ever reached (in 1983, just seven feet below the top of the dam), and the lowest (today, way below what it should be).

And in and around the Visitors’ Centre itself is the story of the building of the dam in the 1930s. It’s really interesting to see some of the imagery that came out of the Works Progress period of Roosevelt’s administration. See how much these images of hard-toiling American workers resemble Soviet images of the time; the eagles outside have also got that pre-war imperial brutality as well. (That’s Karen clowning around…as usual). 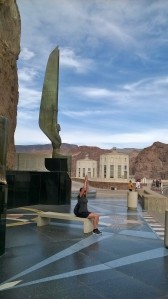 On the other side of the dam is Arizona, so we popped over for a few minutes and an hour, getting caught in a different time-zone as we did (Arizona is an hour in front of Nevada). Here’s the view from an hour in front…

If you get the chance, this is a must-see, and a really thrilling way to end our trip. We’ve done three weeks of travelling and taken in about 1500 miles of California and Nevada (and Arizona). And we’ve had a fabulous time! The next plan – once we’ve saved up the pennies – is a music tour from Chicago to New Orleans. America, we’ll be back!