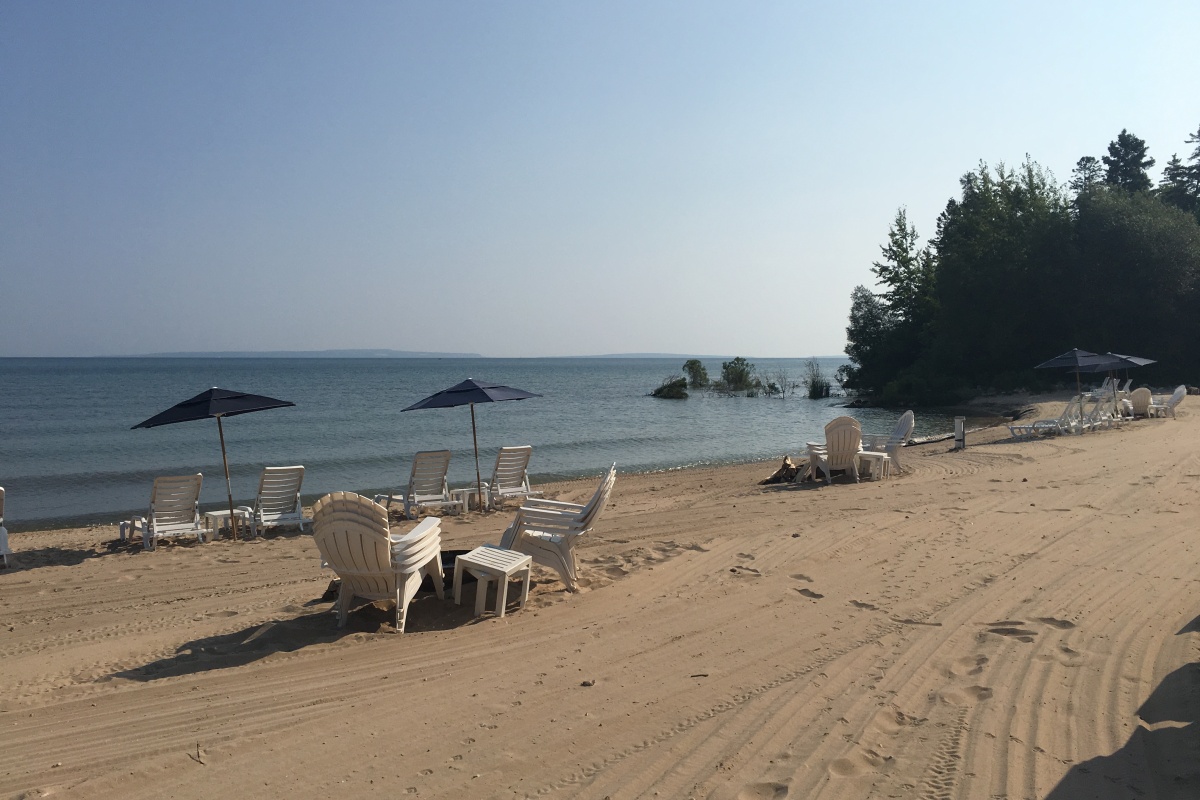 Quick trivia quiz. Which popular music act had their upbringing in the lakeside town of Bay City, MI?

No – not the obvious Bay City Rollers, who were a Scottish act arbitrarily choosing Bay City for their name; nor was it Eminem, though he lives just a stone’s throw away in Rochester Hills, MI. In fact, it’s Madonna. So as the sun rises today (Monday) we head into Bay City in search of a) Madonna evidence, and more importantly b) breakfast.

The latter we find in “Morning at Maggie’s Omelette Shop“, which more or less does what it says on the tin. There’s Maggie (in a picture at least), there are omelettes, and there are lots of happy customers tucking into their frittata. 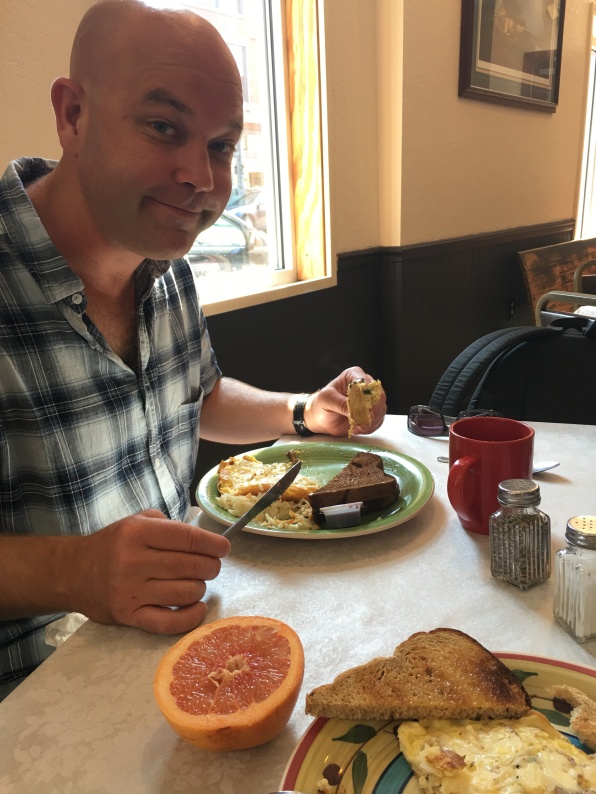 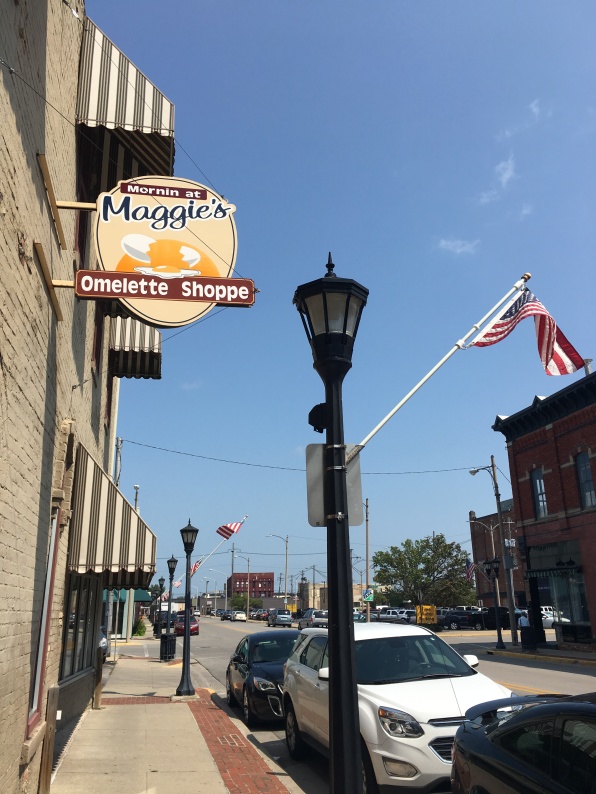 As for Madonna, there’s not a peep of evidence. Even the dress shop is called “Uptown Girl” rather than the more obvious “Material Girl”. Missed a trick there, peeps. (And before you start thinking that maybe Mr. Joel had his roots in Bay City too, think again: he hails from Hicksville, NY. Really.)

Still, Bay City is a pleasant enough town with an old world charm and pretty deserted streets for a Monday morning. There’s your usual scattering of mid-American buildings, diners and hotels, and other run-of-the-mill offerings like a huge planetarium and a helicopter on a pole. 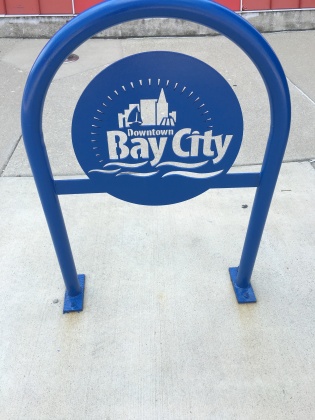 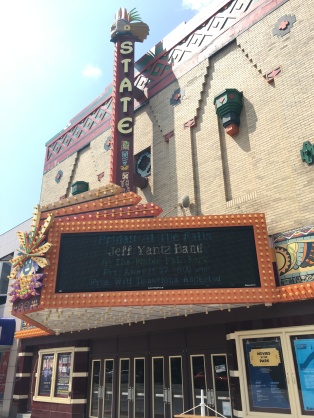 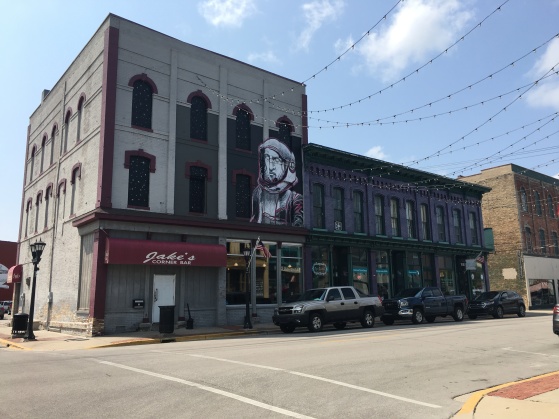 But we’re only passing through, so we pay up at Maggie’s and head on our way, skirting the rest of lower Michigan’s peninsula en route for Mackinaw City. 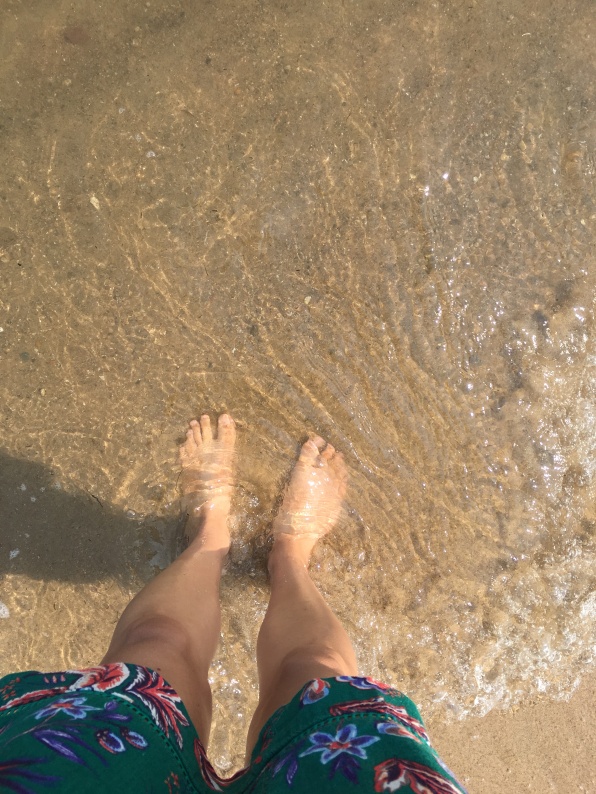 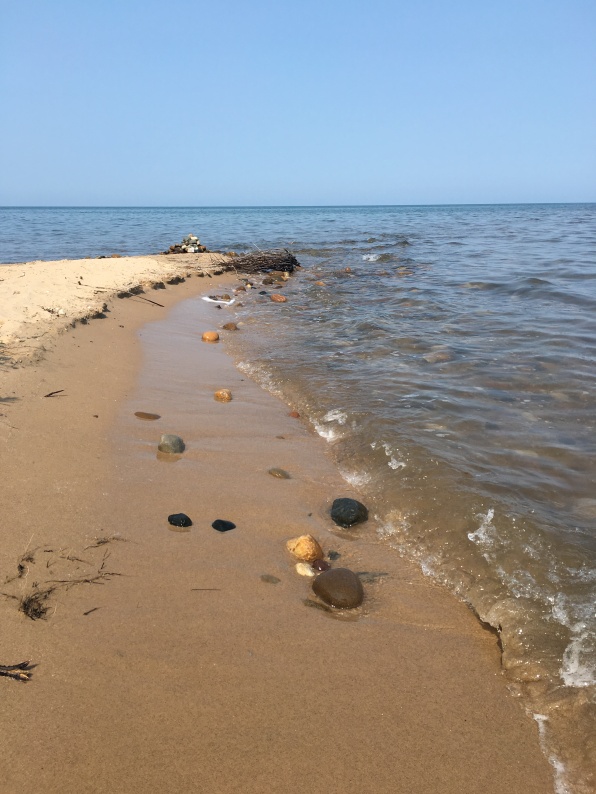 The journey is much the same as yesterday – perhaps unsurprisingly. There are plenty more lighthouses, plenty more holiday cottages with stunning views over the lake, and from time to time a statue celebrating the fictional lumberjack Paul Bunyan. 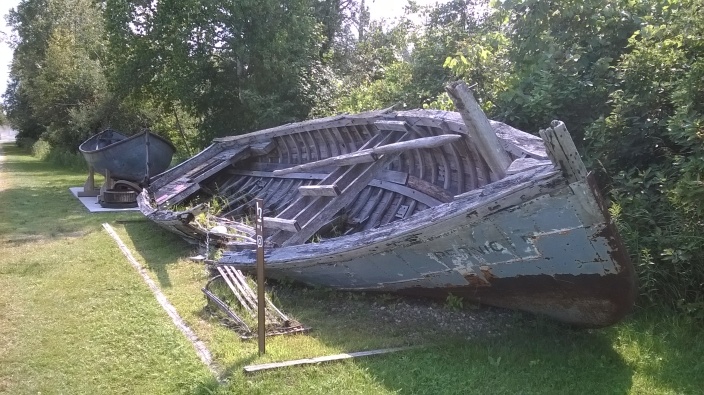 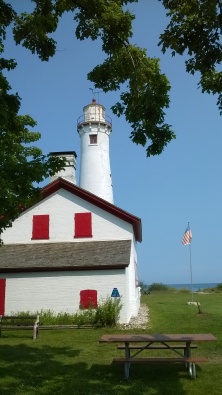 Eventually, we find ourselves on a long stretch of forested road, and (not very) soon we reach our motel. It’s the Clearwater Lakeshore Motel, and although we don’t have a lakeshore room ourselves, it’s fair to say that this complex is right on the lakeside. At night, we find, they light log pits for the residents to sit out on the beach watching the sun set. 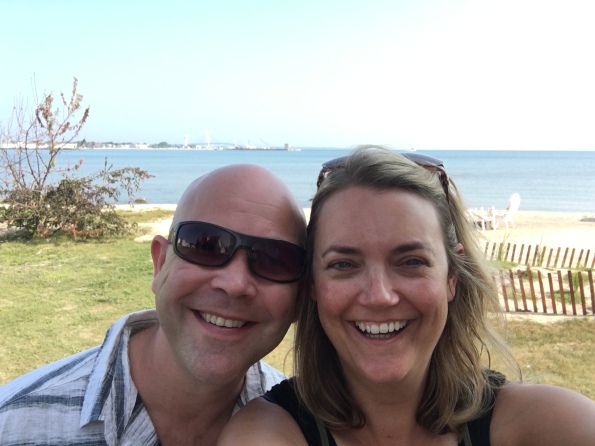 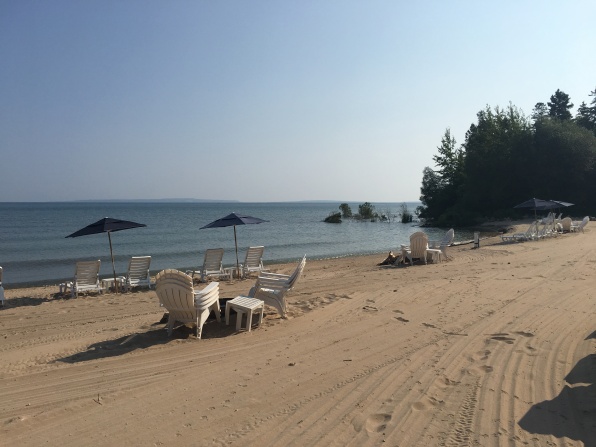 Heading into the town of Mackinaw City for dinner, we discover a local band playing live in the town’s bandstand, so we have a couple of beers and listen to the Springsteen Brothers playing covers of Eagles and Van Morrison songs – they’re really good. It was also great to see some of the Amish community out enjoying the music too. The town of Mackinaw is just on the right side of a stylish resort town – it’s clearly set up for the tourist trade with chintzy shops and a marina hugging the coast; but it’s relaxed and quite pretty. 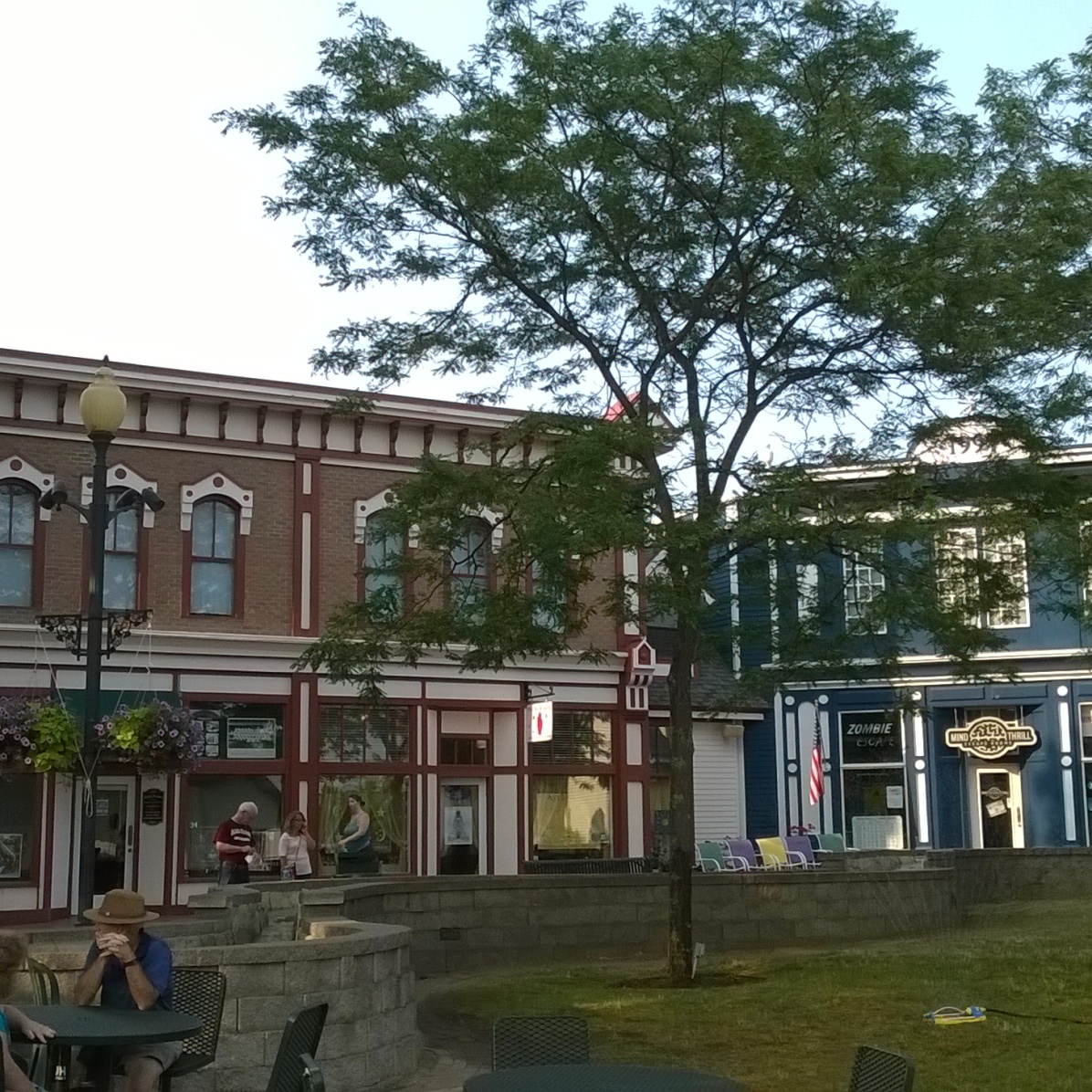 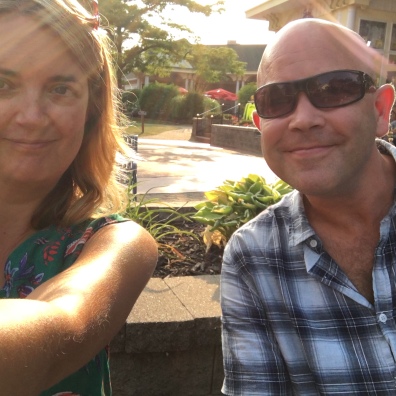 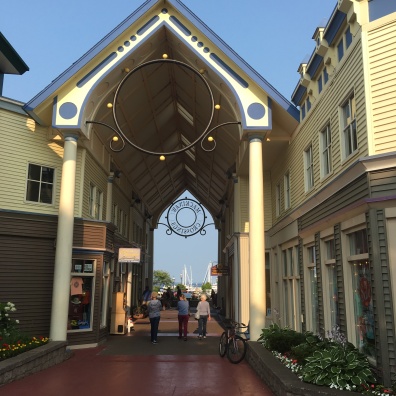 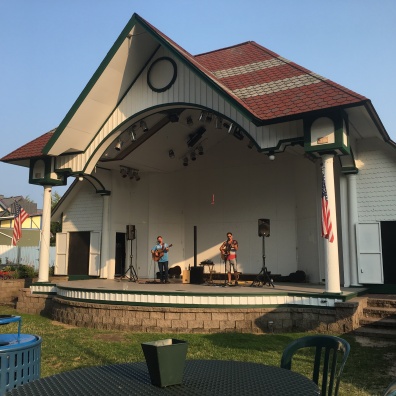 Overcome with festival fever we skip into a tarot reader’s to have our fortunes told. We’re both going to live long and fruitful lives with great success just around the corner. Hoorah. Well worth $35 each for that, then. Must learn not to get trigger happy when we’ve had a beer or two. Later on, we eat at the Keyhole Bar and Grill, which begins to get a bit rowdy. Not really our cup of tea. More like Karen’s bowl of fiery chicken wings (she’s just gotta; Dom just doesn’t). 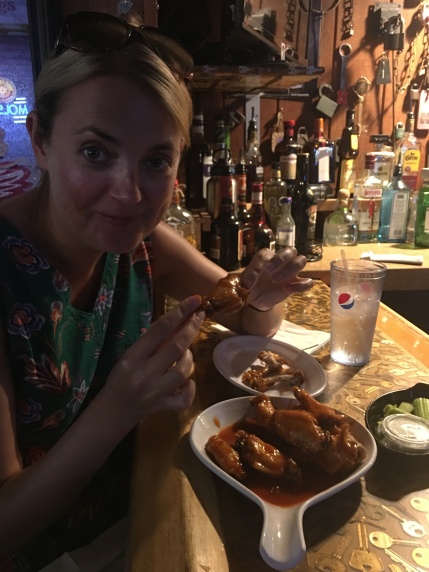 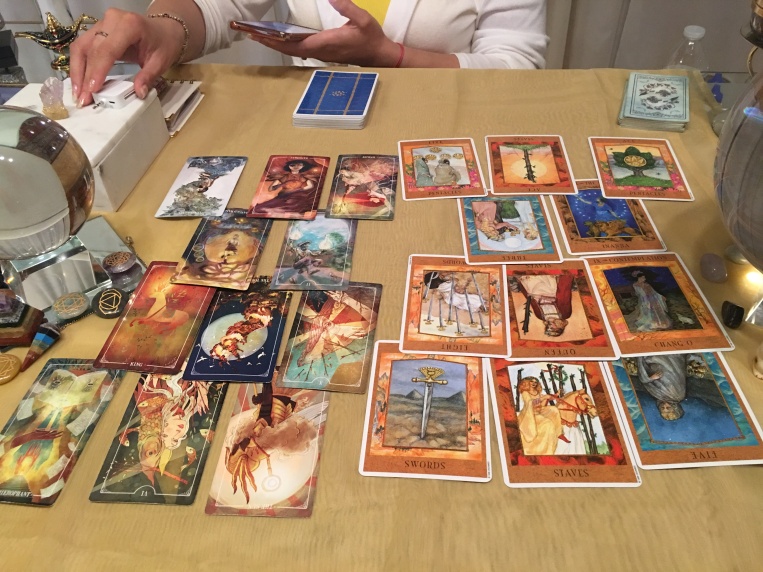 Most tourists seem to use Mackinaw as a stopping off point to visit Mackinac Island, which we don’t have time for. It sounds appealing – there are no cars, and just a handful of hotels; on the other hand, day trippers seem to throng over in ferries, and everyone we talk to assumes that the Island is where we’re headed. Maybe next time.

Of course, we do head to the beach and the fire pits before turning in, and chat with a chap from downstate who’s weekending here. It was nice to meet someone, though strangely, it was so dark that we couldn’t really see him, and we didn’t even exchange names. Just a conversation between passing strangers… 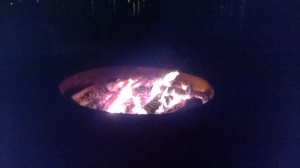