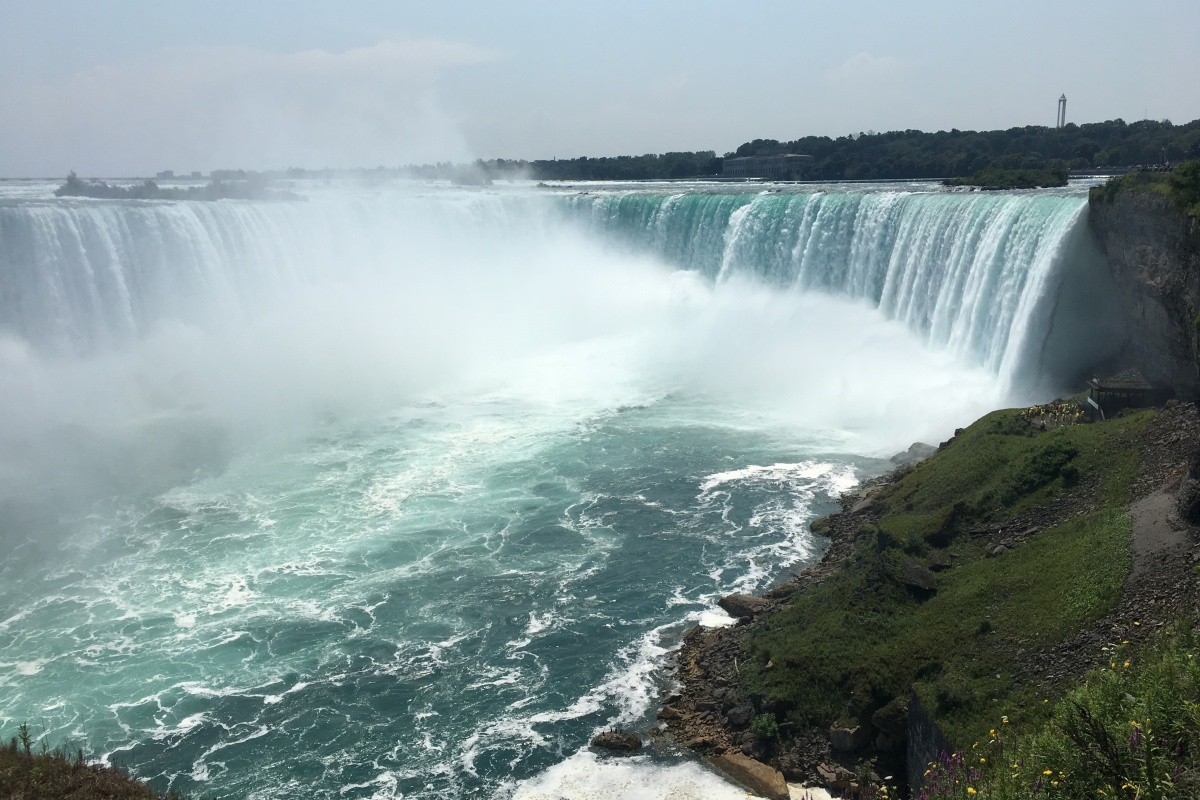 Well. You know what today is all about: there’s only one reason that people come to Niagara, surely? Yes – we’re going to be attempting a tightrope walk across the Niagara river, like Blondin did in 1859, and Nik Wallenda did as recently as 2012. Mind you, Dominic’s a bit afraid of heights, so scrap that. Instead: let’s seal ourselves in a barrel and throw ourselves over the falls like Annie Taylor did in 1901, followed by a queue of other loons. Still a bit crazy? How about a sedate canoe ride down the Niagara river and over the falls? That’s what Jessie Sharp tried in 1990. 1990! Where’s the health and safety officer? Sadly, he died. Anyway – after lots of deaths, some near misses and the odd success story, we decided to stick to the safe option: sailing in a pleasure cruiser into the heart of the falls. Our biggest decision? Which side to launch our intrepid escapade. The Americans dress in natty blue waterproof ponchos and sail in the Maid of the Mist, while the Canadians don a stylish shade of red, to ride the Hornblower. That was our preferred choice. So into the falls we went. Karen was so brave she decided not to wear a poncho at all. Or a barrel. In searing temperatures, the spray of the mist was a refreshing relief from the humidity on the shore.

Joking aside, these falls are pretty impressive – and the boat ride is a lot of fun, if you’re happy getting entirely drenched. Back up top the sheer scale of the falls and the force of the water is quite mind-boggling. Apparently, the erosion caused by the water has meant that the falls have receded 11km down the coast over the last 1000 years. 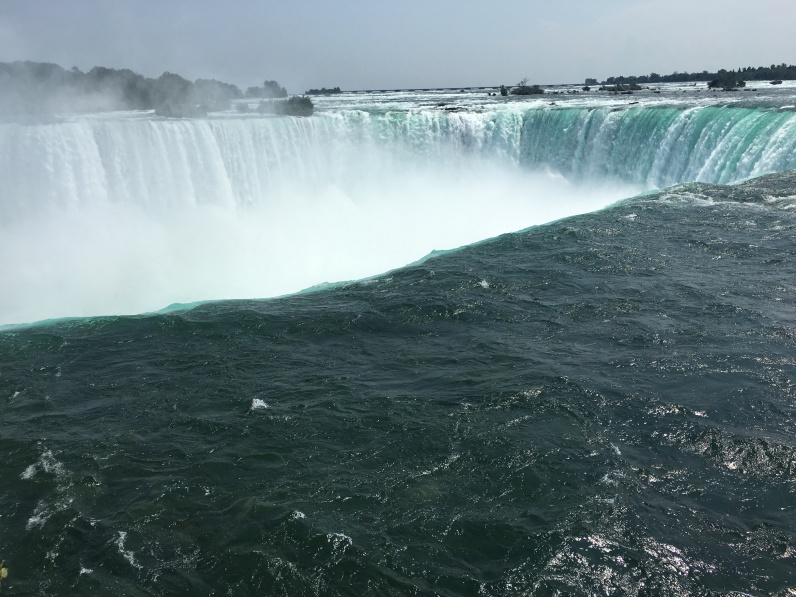 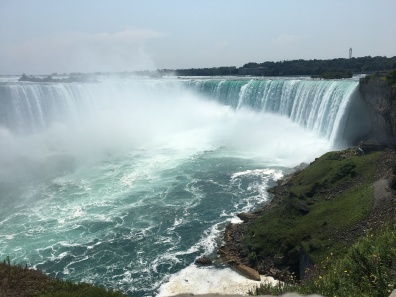 But if you thought that a phenomenally impressive wonder of the natural world was the only reason to visit this neck of the woods, think again. Just a hop and a skip down the river lies the picturesque town of Niagara on the Lake. And when we say picturesque, we mean chocolate box pretty.  Not surprisingly, there’s your fair share of boutique chocolate shops, so we had to purchase some delectable delights. 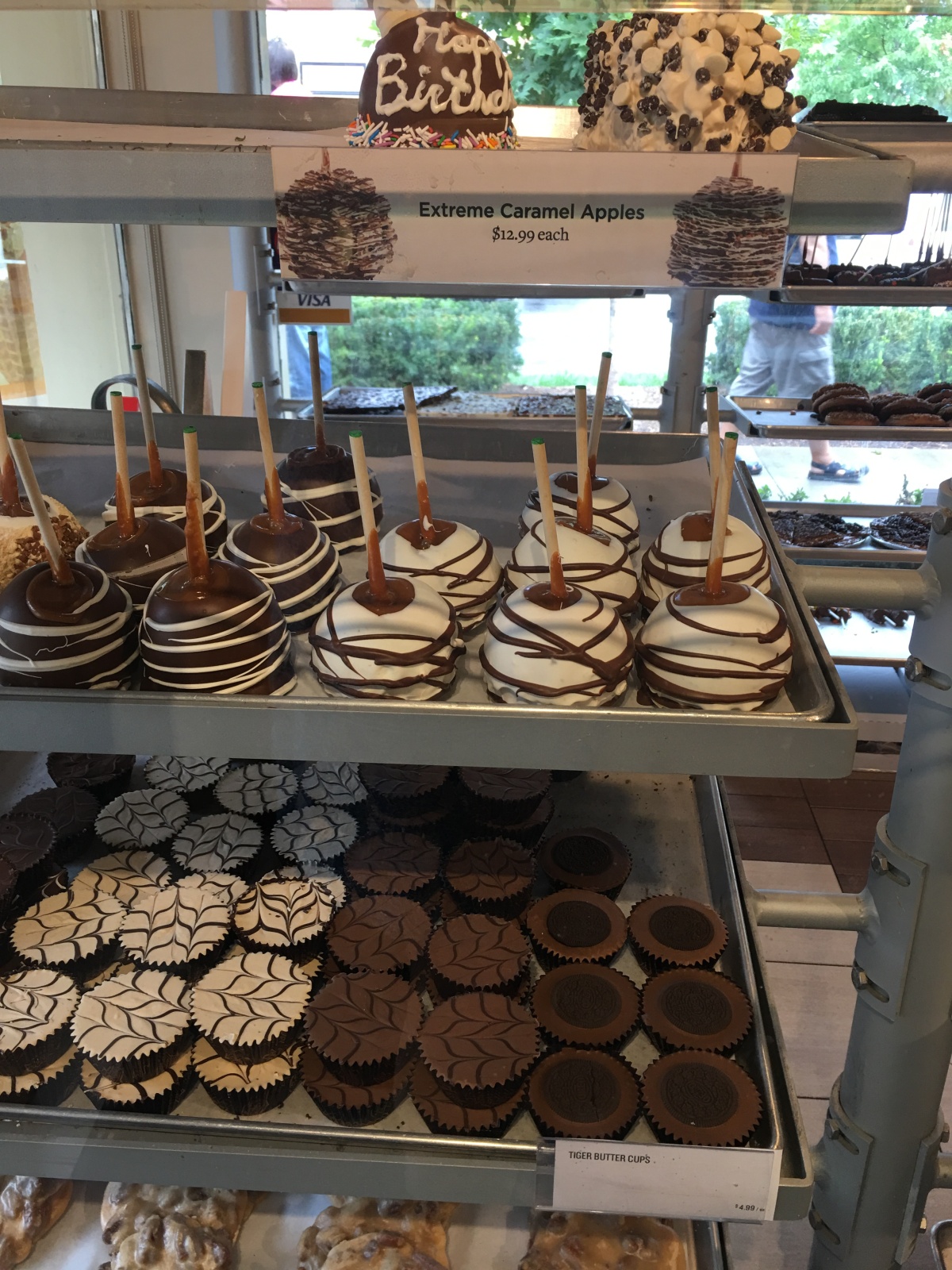 Perhaps more significantly, Niagara on the Lake is home to the Shaw Festival, celebrating the work of GBS. Nowadays, the repertoire has expanded a bit – so had the theatres not been dark on the day of our visit, we could have enjoyed Sherlock Holmes, Joan Littlewood, or Chekhov in one of three delightful venues in the town. 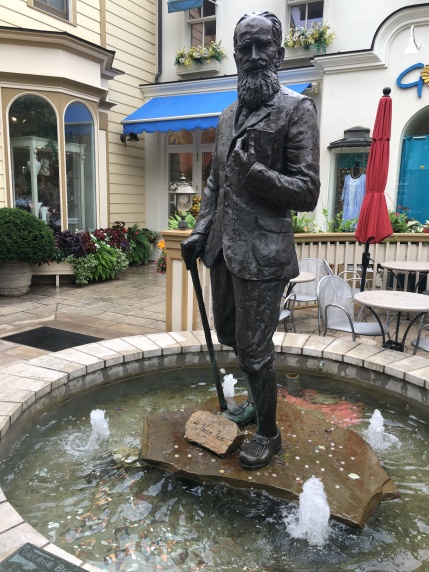 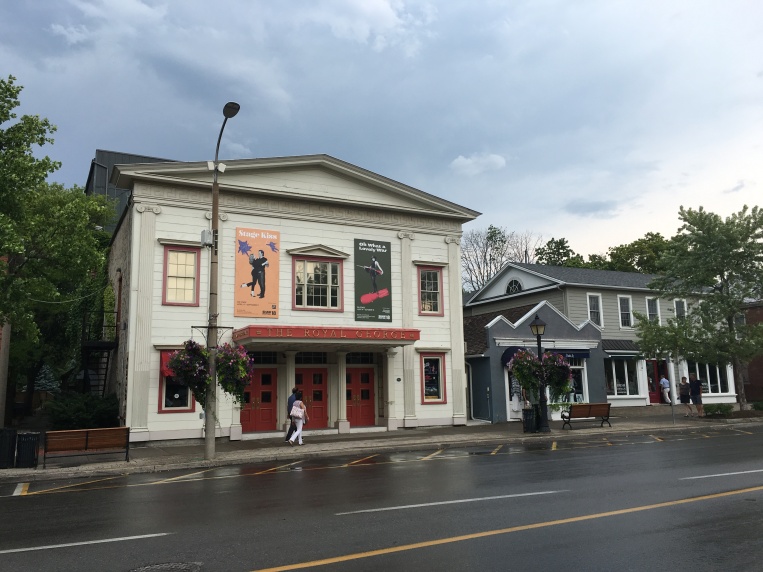 As if that were not enough, Niagara on the Lake is also the epicentre of a thriving wine culture, with vineyards galore and a fair smattering of wobbly middle-class tourists cycling from one winery to the next. Sounds like a future trip for us and the Jaggers.

However, the real reason we are here, of course, is to take in the lakes. And it’s at Niagara on the Lake that we meet Great Lake number three – Lake Ontario. Against the idyllic backdrop of a tree, we find a plaque celebrating the escapades of another load of crazies, who have taken to the water to swim 51km across the lake. We reckon the bloke on the right has just finished his crossing.

Tomorrow, we’ll be making the same journey. But by car. And like the buffalo girls we are, we’ll be going round the outside. See you then.